The biggest threat to health insurance coverage isn’t what you think.

Efforts continue to peel back or weaken coverage gains created by the ACA. But this year, however, the threats are not coming from Congress. They are being introduced in state legislatures or coming on other legal and administrative fronts.

As health-reform battles raged, physicians stood on principle
In June, the AMA joined several other physician organizations to file an amicus brief in Texas v. United States, a lawsuit that threatens popular key provisions of the ACA.

These include:
Patients would no longer have protections for pre-existing conditions.

Children would no longer have coverage under their parents’ health insurance plan until age 26.

“Each of these provisions has broad, bipartisan and public support, and as physicians, we know how much these policies improve the lives of our patients,” wrote AMA President Barbara L. McAneny, MD, in an article about the lawsuit. “For well over a decade, the AMA’s message has been clear: We stand firmly with patients, committed to expanding coverage and protecting them from insurance industry abuses.”

One of the principles of health system reform put forth by the AMA in 2017 was that Americans with insurance coverage should not lose it because of new legislation. 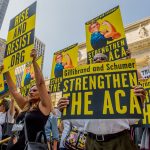